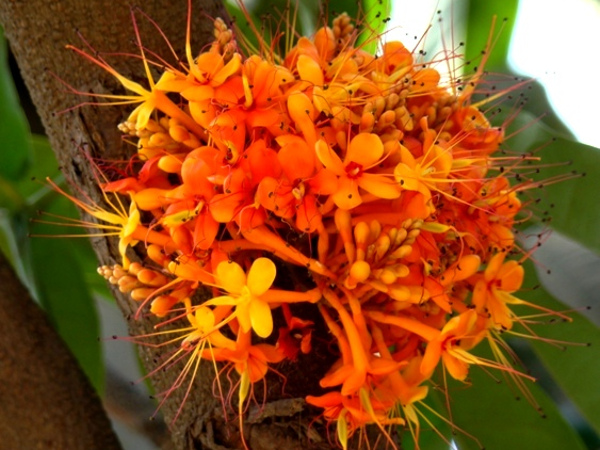 Ashoka (saraca asoca/saraca indica) is the oldest known species of tree in India and is considered sacred in the Hindu faith; its name means “without sorrow” or “that which gives no grief” in Sanskrit. This evergreen is regarded as a universal panacea in Ayurvedic medicine, and with good reason. Ashoka is not only used as an individual Ayurvedic remedy, for a variety of ailments but as part of synergistic blends and in pharmaceutical drug formulations as well. For the sake of brevity, I will only discuss the most documented health benefits associated with this legendary herb.

Ashoka has been used to treat a plethora of female complaints and uterine disorders for many generations. Ashoka is considered particularly effective for female infertility and endometriosis.

One study, published in Complementary Therapies in Clinical Practice, February 2007, identified Ashoka as one of the herbal remedies used by traditional healers in remote areas of India, such as Uttara Kannada District in Western Ghats of Kamataka, to successfully treat “reproductive disorders”1.

An article published in the Journal of Clinical and Diagnostic Research, September 2012, explored infertility treatments popular amongst Indians.

“The drug of choice for female infertility is Ashoka (Saraca asoca Roxb De Wilde) – by its astringent taste and cold potency, it strengthens the uterus. It stops the bleeding by contracting the uterine blood vessels and promoting uterine muscular contraction. It stimulates the uterine function by stimulating the [endometrium] and the ovarian functions.”2

Endometriosis is a disorder that causes the endometrium (uterine lining) to grow outside the uterus. The displaced endometrial tissue continues to act as it normally would inside the uterus – it thickens, sheds and bleeds with each menstrual cycle. However, because there’s nowhere for the shed lining to go, that tissue and blood become trapped; this can affect the surrounding organs, including binding them together.

As one might imagine, endometriosis can be a very painful condition and it’s also very common, affecting more than 3 million American women, of reproductive age, every year. According to an article published in the International Journal of Pharmaceutical and Chemical Sciences,

“Saraca indica is outstanding in ayurvedic medicine for its use as a stimulant to the endometrium and ovarian tissue.”3

It’s possible that Ashoka’s anti-inflammatory/antioxidant effect is why it’s so useful in treating endometriosis. One fertility expert, Dr. Ashok Agarwal, MD, who is the Director of Research at the Centre for Advanced Research in Human Reproduction, Infertility, and Sexual Function, and the Director of the Clinical Andrology Laboratory and Reproductive Tissue Bank, has speculated that oxidative stress may play a role in the development of endometriosis, and several other scientists agree with his theory. You can download the PDF to learn more about Dr. Agarwal’s thoughts and research on the subject.

Ashoka’s ability to purify the blood is well established and is one of the reasons the herb is so effective for treating skin disorders, like acne, as well as skin allergies.

Ashoka’s anti-bacterial properties make it effective in treating skin infections. A research paper published in the African Journal of Traditional, Complementary and Alternative Medicines, Volume 4, No. 3 (2007), showed that Ashoka “…exhibited good activity against all the bacteria tested…”4.

In addition, the antioxidant effects of Ashoka’s flavonoids have been shown to protect against skin cancer, when applied topically. In the study, ‘Chemoprevention of Skin Cancer by the Flavonoid Fraction of Saraca Asoca’, published in Phytotherapy Research, May 2010 (vol. 24, issue 5),

“The present study investigated the chemopreventive property of flavonoids from the flowers of Saraca asoka on 7,12 dimethyl benz(a)anthracene (DMBA) induced skin cancer in mice models. … The topical application of the flavonoid fraction of S. asoka (FF S. asoka), 30 min prior to the application of croton oil thrice weekly for 20 weeks, caused a significant reduction in the number of tumors per mouse and the percentage of tumor-bearing mice. Also the latency period for the appearance of the first tumor was delayed by S. asoka pretreatment. In the flavonoid fraction (5 μg and 10 μg/kg body weight) treated animals, the levels of biochemical markers – rhodanese, myeloperoxidase, β-D-glucuronidase, sialic acid, hexokinase and caspase 3 were significantly restored to near normal levels. These findings suggest the chemopreventive activity of flavonoids from S. asoka on two stage skin carcinogenesis. Histological data also support the chemopreventive potential of S. asoka.”5

So, basically, Ashoka has the ability to prevent carcinogenesis (the creation of cancer) on the skin, when used topically.

Ashoka is not only effective against skin cancer; research has also shown that the flowers of the Ashoka tree have the capacity to kill cancer cells in the body as well. According to ‘Phytochemical and Pharmacological Importance of Saraca Indica’,

“The anticancer principle from Saraca indica flowers indicated 50 percent cytotoxicity (in vitro) in Dalton’s lymphoma ascites and Sarcoma-180 tumour cells at a concentration of 38 mug and 54 mug respectively, with no activity against normal lymphocytes but preferential activity for lymphocytes derived from leukemia patients.”3

The bark of the Ashoka tree has also proven effective against cancer. Another study, in which Saraca Asoca bark extract (SAE) was used, confirmed that Ashoka bark’s phenolic, flavonoid, and gallic acid content are responsible for the herb’s ability to prevent cell mutation. According to the study ‘Antimutagenic and Genoprotective Effects of Saraca Asoca Bark Extract’,

“Presence of phenolics and flavonoids has been reported to exhibit broad range of biological activities in vitro and in vivo, including anti-inflammatory, antimicrobial, antimutagenic, and anti-tumor effects (Aruoma et al., 1996; Aydin et al., 2005; Petersen and Simmonds, 2003). Presence of gallic acid and (À)-epicatechin was confirmed by HPLC analysis of the SAE. Both gallic acid and (À)-epicatechin are known to have antimutagenic activity (Buncova et al., 2005; Lin and Lang, 2000; Yen and Chen, 1996) and could be responsible for imparting S. asoca its anti-inflammatory, antioxidant, antigenotoxic, and antimutagenic properties.”6

Several studies have also shown that Ashoka herb is useful for preventing and treating type 2 diabetes, but one, in particular, helps explain the reasons why – ‘Antioxidant, antiglycation, and inhibitory potential of Saraca Ashoka flowers against the enzymes linked to type 2 diabetes and LDL oxidation’. An excerpt:

“From all these observations it can be concluded that flavonoid fraction of Saraca Ashoka flower can act as an excellent antioxidant and antidiabetic agent. SAF treatment effectively attenuated H2O2 induced oxidative stress in C2C12 cell lines and shows significant antihyperglycemic activity by inhibiting α-glucosidase and α-amylase. It also exhibited significant antiglycation property and inhibited LDL oxidation under in vitro conditions. Results of the study reveal that as a natural antioxidant, Saraca Ashoka flowers might be helpful in preventing oxidative stress and other complications associated with diabetes. These effects may explain the extensive use of Saraca Ashoka flowers in daily life and its possible health benefits and may serve as an ideal candidate for biopharmaceutical industries with fewer side effects.”7

I strongly suggest that anyone interested in type 2 diabetes read the entire study, it’s truly fascinating.

Ashoka herb is considered a universal panacea for many valid reasons. Infertility, endometriosis, toxins in the blood, skin disorders, cancer, and type 2 diabetes are only the most researched health conditions successfully treated by the herb.

Ashoka has no known side-effects and is safe and effective when used in the proper dosages. However, Ashoka should be avoided by pregnant women, because, while Ashoka can be very useful in treating female infertility, using the herb during pregnancy can induce an abortion. Overall, Ashoka is an amazingly multipurpose herb and I look forward to seeing more research studies on this medicinal tree in the future.

1 thought on “The Benefits of Ayurvedic Medicine: Ashoka”