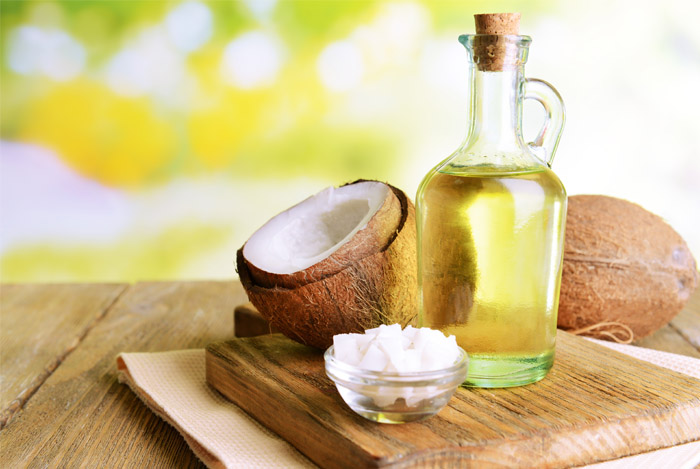 This article contains affiliate links that are marked with an asterisk (*).

The answer to whether or not coconut oil is healthy or harmful depends on who you ask. Recently, the American Heart Association stated that coconut oil is just as unhealthy as beef fat and butter because it is composed primarily of saturated fat. Based on the information found on their website, the National Heart, Lung, and Blood Institute concurs.

For decades doctors and medical researchers have told the public that saturated fat raises LDL cholesterol (that’s the “bad” variety) and decreases HDL cholesterol (the “good” one) and this, according to those experts, leads to cardiovascular disease (CVD). But is that true? And is the saturated fat in coconuts the same as that found in meat and other animal products?

Based on the numerous research studies on the topic, Yes. Saturated fat does indeed raise LDL cholesterol levels. And high LDL levels are a danger signal. People with high LDL levels are likely to form arterial plaques that may burst. Knowing this, you can’t really blame the alarmists for denouncing anything that may lead to this potentially deadly occurrence.

Yes and no. The saturated fat in coconuts is the medium-chain variety, but consuming it can still raise your LDL cholesterol levels. Many people have discovered this the hard way. However, medium-chain fatty acids are metabolized differently than the long-chain variety found in most other foods. Also, the LDL cholesterol produced by saturated fat in the diet is the “fluffy LDL” variety; this is not only true for coconut and other tropical oils but meat and dairy products as well. But coconut oil also has a plethora of health benefits that other saturated fat sources do not.

Saturated fats don’t just raise LDL cholesterol, HDL cholesterol also gets a boost. This fact is often overlooked by those who warn against the consumption of foods that contain saturated fats. HDL cholesterol protects cardiovascular health by transporting the cholesterol out of the blood and to the liver, where it is either turned into energy or secreted.

Coconut oil’s medium-chain fatty acids (MCFAs) are much easier to digest than long-chain fatty acids. This is especially important for people who have difficulty digesting fat. Coconut oil* is a great replacement for butter and margarine in recipes for this reason.

MCFAs do not circulate freely in the blood or get stored away as fat, like long-chain fatty acids. MCFAs are sent immediately to the liver to be converted to energy, turned into ketone bodies or secreted in the stool. This is one of the reasons why coconut oil supports weight loss. Another reason coconut oil supports weight loss is its powerful effect on metabolism. Multiple studies have shown that consuming coconut oil can help you lose stubborn belly fat. And belly fat is considered dangerous, especially for heart health.

A 2010 animal study published in the Indian Journal of Pharmacology found that diabetic rats given coconut oil had lower cholesterol levels and improved glucose tolerance. The scientists concluded that the “Lauric acid present in [coconut oil] may protect against diabetes-induced dyslipidemia.”1

In addition to the aforementioned health benefits, coconut oil is also good for dermal and dental health. Some users have claimed that coconut oil helped heal their acne and reverse gum issues. Coconut oil’s ability to arrest the spread of some bacterium and fungi is believed to be responsible for these benefits. You should definitely Google this topic; there are many interesting articles on this subject.

I think it’s safe to say that coconut oil is indeed a healthy source of fat. There is certainly a considerable amount of evidence to back up this presumption. However, I believe it would be wise to eat coconut oil in moderation*, as too much of anything, particularly fat, is not a good thing.

2 thoughts on “Is Coconut Oil Unhealthy?”