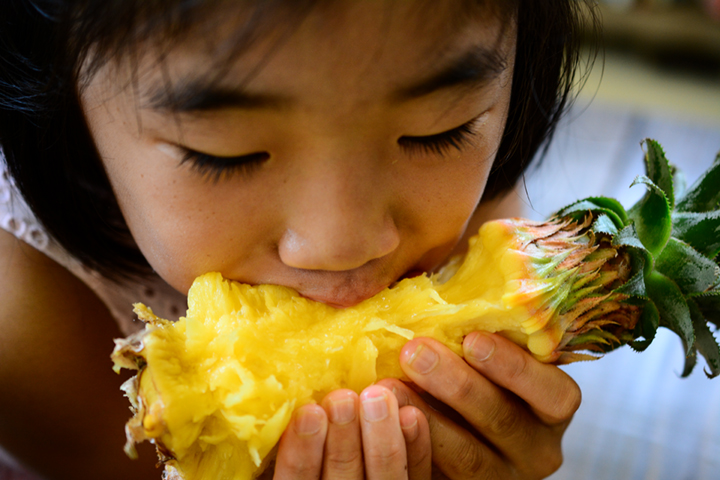 In addition to all of the benefits I listed in “Pineapple Health and Beauty Benefits”, this member of the bromelia family is loaded with a proteolytic enzyme called bromelain. Numerous research studies have shown that bromelain can improve health in multiple ways.

Bromelain has been studied and found quite effective for fighting inflammatory pain. This is very good news, as a growing body of evidence has shown that most NSAID pain relievers, which were created to treat inflammatory pain, increase the risk of heart attack, stroke, and even hearing loss. On the other hand, bromelain has been proven to be both safe and effective.

“Over the past seven years, several human clinical studies reveal that bromelain-based formulations are as effective and potentially even more effective than anti-inflammatory prescription drugs in relieving pain and inflammation.”1

“[R]esearchers divided 90 patients with painful osteoarthritis of the hip into two groups: one half receiving an oral enzyme preparation containing bromelain for six weeks, while the other half received the anti-inflammatory drug diclofenac (sold under the brand name Voltaren® and generic names). They found that the bromelain preparation was as effective as diclofenac in standard scales of pain, stiffness and physical function, and better tolerated than the drug comparator.”1

Other studies comparing a standardized commercial bromelain preparation with diclofenac and other anti-inflammatory drugs have shown the same results.

In one such study, where a 90mg bromelain supplement was given 3 times a day was compared with 50mg of diclofenac twice a day,

The study of bromelain’s anti-inflammatory properties has also led to the discovery that it can help injuries heal faster. And not just minor injuries like sprains, strains and other mild traumas. Studies have shown that bromelain can help surgical patients heal faster as well. Dr. Stephen Sinatra, recommends bromelain and other nutritional supplements as part of a ‘Power Healing’ program, “aimed at fortifying patients before surgery and accelerating their [recovery thereafter].”2

“Take bromelain on an empty stomach for two weeks after surgery (follow label instructions for dosage). This formidable pineapple enzyme supplement helps prevent blood clots, aids the liver and digestion and decreases inflammation and pain after surgery—all vital to surgery recovery. It also helps to remove protein debris that form at trauma sites.”2

Bromelain is also believed to be useful for relieving sinusitis, because it activates immune cells that fight infection. A study published in Cellular Immunology explained how.

“The innate immune response is critical for effective immunity against most pathogens. In this study, we show that bromelain, a mixture of cysteine proteases, can enhance IFN-gamma-mediated nitric oxide and TNFalpha production by macrophages. Bromelain’s effect was independent of endotoxin receptor activation and was not caused by direct modulation of IFN-gamma receptors. Instead, bromelain either enhanced or acted synergistically with IFN-gamma receptor-mediated signals. … These results indicate a potential role for bromelain in the activation of inflammatory responses in situations where they may be deficient, such as may occur in immunocompromised individuals.”3

Bromelain has also been proven effective in treating a specific skin disorder called pityriasis lichenoides chronica, which is characterized by the appearance of long-lasting, asymptomatic skin lesions. This disease is difficult to treat, because it has no known cause and treatment outcomes have proved unpredictable, at best. That being said, researchers treated 8 pityriasis lichenoides chronica patients with bromelain for 3 months.

“At the end of the treatment period, all patients showed complete clinical recovery with no adverse effects. And although two patients relapsed five to six months after stopping therapy, they responded again to another brief cycle of therapy. The investigators concluded that the efficacy of bromelain ‘could be related to its anti-inflammatory, immuno-modulatory, and/or antiviral properties.’”1

So, the study was a success for all of the study’s participants, even though two of the subjects required further treatment to be completely cured.

Preliminary findings also suggest that bromelain may help those with Ulcerative Colitis, an inflammatory bowel disease (IBD). Although there are no human studies on bromelain for IBD, there is a case report of two patients with ulcerative colitis who responded well to treatment with bromelain.

There was also a study done on the biopsy tissue taken from the intestines of people with Crohn’s disease and ulcerative colitis. The researchers found that the tissue appeared to respond positively to the bromelain and showed fewer IBD markers than the tissue that was not treated with bromelain. But more research needs to be completed before researchers are willing to recommend bromelain as an effective treatment for this painful disorder.

To be clear, the evidence of bromelain’s effectiveness in treating all of the aforementioned ailments is based on studies using bromelain nutritional supplements. However, the enzyme can be found in the flesh and juice of all pineapples – fresh, canned and frozen. The amounts will be nowhere near as concentrated as what’s found in pill form, of course, but a little bromelain from its sweet, tropical source is certainly better than none.