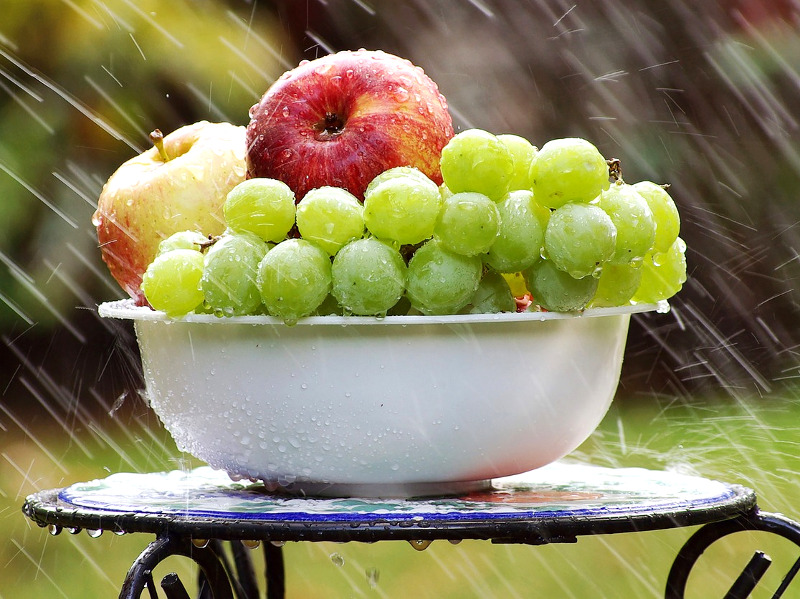 Eating raw plant foods is widely considered a great way to cool the body, but there are specific popular foods that are responsible for this reputation. Knowing which is useful, these are some of the most plentiful and popular plant foods that cool the body.

Why Are These Foods Cooling?

What makes melons such as watermelon, cantaloupe, and honeydews so cooling? Their high water content definitely helps, but it’s the non-essential amino acid citrulline that makes melons among the coolest of the cooling whole foods. Citrulline is converted to arginine in the body, and arginine is needed to produce nitric oxide. Nitric oxide, in turn, relaxes the blood vessels, improves blood flow, and helps remove ammonia from the body. Melons are naturally diuretic, so they help remove other unwanted toxins from the body, as well, even as they hydrate and refresh. Sweet melons have long been used in Chinese medicinal practices to cool a fever and clear heat from the body. The rind can be used topically to treat heat rashes and burns.

Like melons, Radishes are not only naturally cooling they also help to lower blood pressure. In Ayurvedic medicine, they are called “Mooli” and are used to cleanse and cool the body. In TCM (Traditional Chinese Medicine), Radishes, called Lai Fu Zi, are used to help people with a “hot” constitution increase their yin energy, as such people are very sensitive to heat, even in Winter; although their aversion to heat is less apparent during cold weather.

Apples, like melons and radishes, clear toxins from the body as well as cool. Apples can even remove alcohol from the liver and, thus, reduce the possibility of liver damage as a result of alcohol consumption. Also, since alcohol raises the body’s temperature, apples help to counteract that effect.

Grapes are a good cooling food due to their relatively high water content – which naturally cools the body, their ability to promote the production of fluids in the body, and also because they have an alkalizing effect on the blood. Eating alkalizing foods like grapes not only balances the body’s internal chemistry, which helps to prevent illness, it also helps keep the internal thermostat in check. In TCM grapes are said to relieve night sweats.

Pears, like radishes, have also been used in TCM to cool and moisten the body. Pears are believed to clear heat from the lungs. They’re even recommended as good to eat while one undergoes chemotherapy treatments because chemo and radiation create heat in the body and pears help to dispel that heat and soothes the system.

Citrus fruits and berries are cooling mainly because they contain relatively high amounts of water, but they also have an astringent quality. Oranges, just like apples, have the ability to filter excess alcohol out of the liver, protecting it from damage. In addition, oranges are believed to balance liver function and help it heal faster. In TCM sour foods like most berries (even though they are also sweet), lemons, limes, and grapefruits are said to be cooling because they generate yin fluids, which helps to clear heat in the body.

Lemons are considered “slightly cold” in nature and have the ability to cool the body and relieve Summer-heat, promote the production of bodily fluids and ease thirst. Strawberries are considered “cold” in nature and, in addition to expelling heat and toxins, they are also used in TCM to treat sore and dry throats, because they are very moisturizing and thirst-quenching.

Bananas are also considered “cold” in nature. In TCM they are used to clear away pathogenic heat, cool the blood, promote the production of bodily fluids, quench thirst, moisturize the intestines (which helps with constipation), reduce blood pressure and remove toxins and poisons.

Cucumbers and Celery are said to have “cool natures”, that clear away heat and eliminate dampness. In TCM cucumbers are used to treat sore throat, conjunctive congestion, and thirst. However, people with chronic bronchitis and ulcerative colitis should avoid cucumbers. Celery is said to detoxify the body and calm the liver.

There are other body cooling whole foods, of course, but these are the easiest to find and most inexpensive. They are especially cheap during the warm months when they are in season and most useful. One can always count on farmer’s markets, supermarkets and food co-ops to keep these fruits and vegetables in stock. And, if one has a green thumb and room for a home garden, it could be even more rewarding to grow some of these plants oneself, particularly if you’re concerned about pesticide residue.

You can also cool off by drinking more water more often when the temperature rises, and by keeping your fruits and vegetables refrigerated before eating. Refrigerating all foods will make them more cooling, even if they are not cool by nature. How foods are prepared and combined also plays a role. Raw foods are, obviously, going to be more cooling than cooked, and combining cool foods with other cool foods will maintain and, perhaps, even heighten the cooling effect; whereas if you eat cooling foods with warming foods – cherries for example – the cooling effect will be dampened. In fact, depending on the ratio of cool to warm foods in a meal, the cooling effect may be completely neutralized or even warmed.

If you prefer your veggies and fruits – bananas for instance – at room temperature, that’s fine too. As actor and writer Stephen Wright once said, “It doesn’t make a difference what temperature a room is, it’s always room temperature.”

So keep in mind, all of the aforementioned cooling foods were used to beat the heat long before the invention of the refrigerator, AND in parts of the world that were and still are naturally hot and dry much of the year. So, if these foods worked under those conditions, they can certainly keep you cool wherever you are in the world today.

Gemma Francis. “The Best Foods to Keep You Cool in the Summer Heat”. The Independent, August 6, 2018. Web

Annalisa Palmer. “10 Cooling Foods to Eat in the Summer Heat (With Recipes)”. One Green Planet, 2014. Web