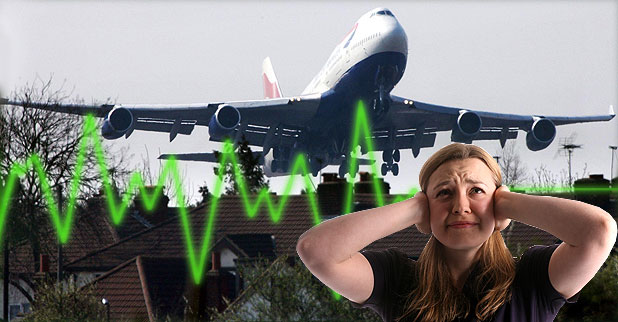 Noise pollution is more than just annoying and intrusive. It can affect your quality of life, interfere with activities, interrupt sleep and, with time, negatively affect your health and emotional well-being.

If you can answer “Yes” to more than one of the following questions, the answer to the titular question is probably yes as well.

The stress signals and risk factors that epidemiological researchers have analyzed in relation to noise pollution, impose a higher risk of cardiovascular diseases for those exposed to noise on a consistent basis.

“Sound/noise is a psychosocial stressor that activates the sympathetic and endocrine system. Acute noise effects do not only occur at high levels in occupational settings, but also at relatively low environmental sound levels when, more importantly, certain activities such as concentration, relaxation or sleep are disturbed.”1

So, the noise doesn’t have to be particularly loud, just loud enough to be disruptive.

A multitude of studies have established that IHD (ischemic heart disease), hypertension, anxiety and stress can be triggered, or exacerbated, by noise pollution. Stress and anxiety alone can worsen and trigger both hypertension and IHD, as well as other cardiovascular diseases. And it’s worth noting that IHD (specifically) has been the number one cause of death worldwide for many years now. None can doubt that IHD, and other cardiovascular diseases, lead to a shorter lifespan.

The psychological toll of noise pollution can be just as damaging, to health and relationships. Studies have shown that being subjected to noise makes people more anxious and aggressive. The reasons for this were alluded to in the study ‘Noise Pollution: A Modern Plague’.

“There is growing evidence that noise pollution is not merely an annoyance; like other forms of pollution, it has wide-ranging adverse health, social, and economic effects. … Noise, even at levels that are not harmful to hearing, is perceived subconsciously as a danger signal, even during sleep. The body reacts to noise with a fight or flight response, with resultant nervous, hormonal, and vascular changes that have far reaching consequences.”2

Keep in mind, noise is defined as unwanted sound. Our lack of control over the unwanted sound is partially responsible for its psychological and emotional toll on health and well-being.

Protecting yourself from noise pollution

Depending on where you live, gaining relief from noise pollution can range from simple to impossible. This is true even in the United States, where “domestic tranquility” is one of the six guarantees of the U.S. Constitution. Over the past three decades, special interest groups have slowly eroded that right (and others) to line their already full pockets.

“[In] 1982, the government abruptly terminated federal funding for the Office of Noise Abatement and Control, the vehicle by which the public was to be protected from the adverse effects of noise. The lack of funds threw total responsibility for noise control to the states, which have had a spotty and generally poor record with respect to noise abatement. Since the Act itself was not repealed, local and state governments may have been deterred from trying to regulate noise. Furthermore, failure to repeal the Act sent the message that noise was not an important environmental concern. As a result, in the United States, most police departments seem to be unwilling or unable to respond to noise-related problems in a way that provides any measure of genuine or timely control. Yet, in most cities, as noise pollution continues to grow-some say as much as sixfold in the past 15 years-so do complaints about noise.”2

It is impossible to achieve overall good health and well-being when you are under constant stress/attack by an outside force. Noise pollution is one of the most dangerous invisible forces affecting our health today, and it is imperative that we take steps to protect ourselves from its effects.