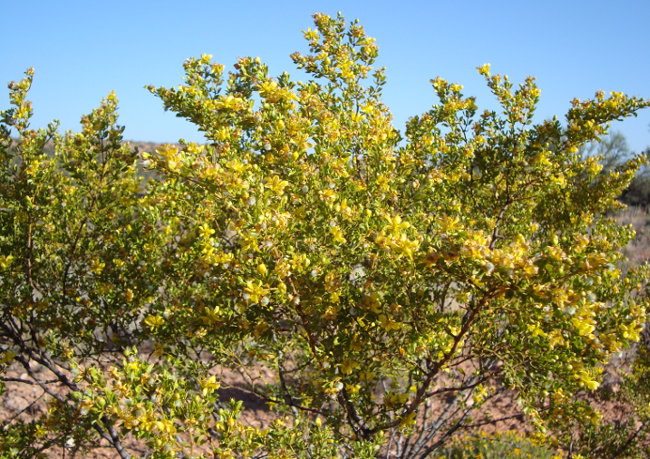 Chaparral (Larrea tridentata) is a very powerful herb. You’d never guess by looking at it, but the small leaves of the creosote bush are capable of cleansing, protecting and possibly even curing the incurable. Due to chaparral’s power, it is both highly regarded for its healing abilities and greatly feared for its possible side-effects and drug interactions. In this article, we will discuss both.

Chaparral has been used by herbalists to cleanse the lymphatic system for a very long time. It also clears heavy metals from the blood and is believed to drive tumors into remission.

Studies have suggested that chaparral inhibits uncontrolled cell proliferation as well as damage to DNA. “Native Americans have used chaparral for centuries as an anticancer remedy. In fact, it is the cornerstone of most anticancer herbal formulas.”1 This includes the Essiac formula discovered by Rene Caisse.

Studies have proven that chaparral produces compounds that inhibit the replication of HIV. These compounds are called tricyclic lignans, and some are stronger than others. According to a study published in the Journal of Chromatography A,

“The most predominant anti-HIV compound FB2 (denoted Malachi 4:5-6 or mal.4), which occurs in 0.23% yield, was separated from its FB1 isomer (0.13% yield). Compound FB4 and two tricyclic lignans (FB3 and FB5) were also isolated in a substantial amount for further testing of their anti-HIV activities. These compounds may represent a new class of anti-HIV agents with important clinical relevance.”2

Chaparral extracts are also being used as a natural antiviral treatment for herpes simplex virus (HSV).

Herbalists have used chaparral externally to treat psoriasis, eczema, burns, and sunburns for generations. According to Annie’s Remedy,

“Chaparral herb should only be used externally in baths, and the tincture can be used to make creams and lotions. Applied to the skin, chaparral can have a remarkable healing effect on the skin. It is useful for eczema, psoriasis, and as an excellent antiseptic dressing for cuts, sores and bruises.”3

It is not wise to apply chaparral herb directly to the skin. I’ll explain why in a bit.

Chaparral leaves contain a powerful antioxidant that’s an effective herbal antibiotic. According to nutraceutical researcher Jon Barron, “Chaparral is one of the most powerful anti-oxidants in nature. The primary biochemical responsible for this is NDGA (nordihydroguaiaretic acid). NDGA is so effective that it is often used as a food preservative.”1

So, it should come as no surprise that it is an effective defense against cold germs and flu viruses. It has also been used to treat urinary and respiratory infections, as well as chickenpox.

According to an article published in the Journal of Ethnopharmacology, chaparral has been used to treat many other conditions and complaints as well.

The cancer claim has only been proven partially true. Studies have shown that chaparral can shrink cancerous tumors in some, but in one study those patients were the lucky few.

“Of the 45 people who took part, 4 found that their cancer got smaller. The effect lasted between 10 days and 20 months. But in the other 41 people, the tumours got bigger. Overall, the researchers found that chaparral wasn’t safe and did not work well for treating cancer.”7 However, “[in] some lab studies it seemed that NDGA might help other cancer drugs to work. Researchers are looking into whether a pure form of NDGA might be useful as a cancer treatment. But this is very early research. A substance can show promise in the lab, but still not be a successful treatment for cancer in people.”7

You should also keep in mind that chaparral is not traditionally used alone for cancer treatment. It is usually one ingredient among many in natural anticancer remedies, like Essiac. That being said, I see no reason to distrust the intentions and findings of the medical researchers conducting the aforementioned clinical studies (which used either the whole herb or the NDGA extract).

Chaparral is considered a powerful blood purifier, but some believe that long term use could be harmful to the liver and kidneys. Chaparral was used in many herbal and pharmaceutical preparations before it was determined that it could pose a health hazard.

“[It] was banned after reports of toxicity during the early 1960s. Renal and hepatotoxicity are also reported for chronic use of creosote bush and NDGA.”4

Some advise only using chaparral externally. Annie’s Remedy, for example, states, “FOR EXTERNAL USE ONLY!! Reports of serious liver disease have been associated with the ingestion of chaparral. These reports generally involved persons taking large dosages in the form of capsules”3

As I mentioned above, consuming chaparral could be harmful to the liver. This is especially true for those who are suffering from a liver disorder. But even if you are in perfect health, you should still take care not to overuse this herb. Chaparral can have serious side-effects for some, which is why it is not recommended for children.

According to WebMD, “Chaparral can cause side effects including stomach pain, nausea, diarrhea, weight loss, fever, and liver and kidney damage. Putting chaparral on the skin can cause skin reactions including rash and itching.”5 It is not recommended for pregnant and breastfeeding women, because it may worsen liver disease or “cause serious liver and kidney problems.”5

Conversely, in an article posted on Natural News, a 1991 book called ‘Miracle Medicine Herbs’ is cited as stating “All tests on chaparral indicate that it is positively non-toxic and has never shown any side effects on patients and if present research is successful it will offer the first anti-cancer drug.”6

The article also cited another book called ‘Herbs for Health and Healing’, which was published in 1996. This book also claims that chaparral poses no danger to human health, with judicious use.

“Herb industry surveys show that more than 200 tons were sold in the United States between 1970 and 1990. And during this time, there was not a single complaint of side effects arising from the use of this herb. When two to three cups of chaparral tea or the isolated NDGA were given daily to more than 50 cancer patients, the only side effects were occasional nausea or diarrhea. Very large doses resulted in lowered blood pressure.”6

And yet, again, according to Cancer Research UK, “A review of 18 case reports of people who took chaparral showed that it can cause severe, irreversible liver damage and failure. It can also cause kidney damage in some people.”7

Considering the sizable chasm between opinions, regarding chaparral’s side-effects and safety, it would be unwise not to consider both positions, before deciding to use this herb.

Hepatotoxic drugs – drugs that can damage the liver – are said to interact with chaparral, because chaparral is also believed to be hepatotoxic. These drugs are available by prescription and over-the-counter; hepatotoxic drugs include pain relievers, yeast infection, and irregular heartbeat treatments and even a popular antibiotic. Here’s a shortlist:

There are many more drugs that are considered hepatotoxic or potentially hepatotoxic; so, you may wish to consult your doctor regarding any drug(s) you are already taking, if any.

The main reason I wanted to write about chaparral, despite the controversy surrounding it, is to share my own positive experience with the herb.

I’ve used chaparral many times over the years with no ill effects. I used it before and after learning of the controversy surrounding chaparral’s possible side-effects. For me, it has been an excellent blood cleanser (I use it in herbal infusions along with other blood cleansing herbs). I have never used chaparral for a period longer than 2-3 months, and I’ve never used it alone.

You should also keep in mind that I do not suffer from any liver disorders, nor have I ever taken a hepatotoxic drug of any kind while using chaparral.

Opinions regarding chaparral’s safety vary widely, but if you do choose to use this herb, you should exercise every precaution and start with a very low dose. You should always start with the lowest possible dosage of any new herb or supplement because even if it doesn’t have any known ill effects you could still be allergic. The lower the dose the less intense the allergic reaction.

17 thoughts on “The Health Benefits & Dangers of Chaparral Herb”