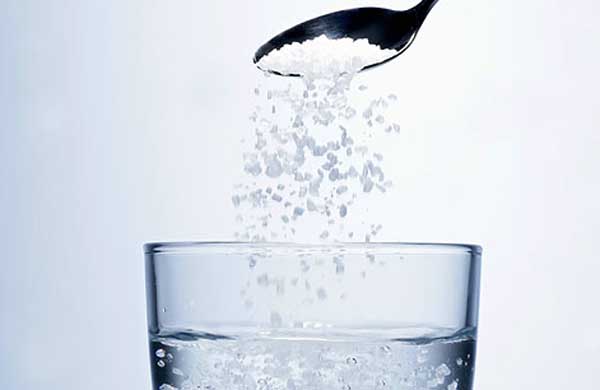 The most definitive symptom of abnormally low sodium levels, a condition called hyponatremia, is an unquenchable thirst. There’s no feeling like it. No matter how much water one drinks, the thirst cannot be sated; within five minutes of imbibing water, regardless of amount, the thirst will have returned.

Other Symptoms of Sodium Deficiency

If not treated in a timely manner sodium deficiency can lead to coma and death.

The Importance of Sodium

Our bodies cannot function without sodium, our most important electrolyte. Electrolytes are minerals that carry an electric charge, like microscopic batteries, and these “batteries” affect the amount of fluid in the body, blood pH, muscle function (including the heart), neural impulses and more. Sodium and other electrolytes are responsible for life functions at the cellular level and beyond. Without sufficient amounts of sodium in the blood and intracellular fluids, the body will fail and we will die. Sodium is literally a matter of life and death; so, how much we consume (or don’t) is the difference between healthiness and illness, a sense of well-being and cognitive decline.

Dehydration is the result of one of two things: fluid loss or decreased fluid intake. So, without enough sodium to hold onto the water one drinks to quench their thirst, the water one drinks pretty much goes straight to the bladder for removal. Sodium regulates fluids and retains water in the body; so, without a sufficient amount of the mineral, thirst cannot be quenched. Under these circumstances, if one doesn’t increase their sodium intake the symptoms will grow more intense with every glass of water they drink, as one’s remaining sodium content is further diluted.

Sodium deficiency causes a loss in fluid balance in cells (intracellular) and outside of cells (extracellular), and this can result in severe headaches caused by brain cell swelling. Cells in other parts of the body can swell as well, but the cranium is hard and, so, the brain cells can only expand so much within the skull. Headaches are just the beginning of one’s brain issues if the sodium deficiency is not soon rectified. I dare not imagine what kind of hallucinations hyponatremia may generate, nor how soon after one would slip into a coma.

Sodium also controls the neural impulses (electrical signals between nerve cells), which means muscle tissue and even thoughts are affected by a deficiency. One may suffer muscle weakness before the cramps come but can experience both at once as well. Gastrointestinal symptoms such as loss of appetite, nausea and, especially, vomiting are a sign of worsening hyponatremia. The gastrointestinal issues and other nonspecific symptoms, including irritability and mood swings, could have other causes, of course, but in combination with an unquenchable thirst, you can be almost certain that you have a sodium deficiency.

How Much Sodium Is Needed?

According to the National Heart Lung and Blood Association, 500mg is a safe daily minimum intake of sodium for adults.

“This amount will be enough to maintain the bodily functions that require sodium. In an average temperate climate, a normal adult may be able to thrive with as little as 115 mg of sodium each day.”1

Personally, I wouldn’t test the ‘115 mg of sodium may be enough’ theory. The CDC (Centers for Disease Control and Prevention) recommends that everyone 2 years old and older keep their sodium intake below 2,300mg and consume at least 4,700 mg of potassium a day, to keep their sodium and potassium levels in balance. People at higher risk for hypertension are advised to get no more than 1,500mg of sodium per day. But even those who are not at risk for hypertension can benefit from this recommendation, as no one who is not regularly losing an excessive amount of fluid has a need for greater amounts of sodium.

How Sodium Gets Lost

It’s important to drink water during and, if necessary, add salt to water after strenuous, sweat-inducing exercises. Sports drinks contain sodium for this very reason. However, most people already have table salt or sea salt in their kitchen cabinet; so, unless one just prefers sports drinks, that’s money one can easily save. Recovering from blood loss requires more than a glass of salty water or sports drinks.

When one loses a relatively large volume of blood, in addition to a blood transfusion, doctors order an IV (intravenous) rehydration drip, which is just water with a bit of salt or sugar added. In the case of blood loss, it’s usually the salt bag that’s administered. Both salt and sugar IVs may be necessary for patients suffering from severe diarrhea.

Diarrhea is especially dangerous for infants and young children, who naturally retain less fluid. And anyone who’s had the misfortune of being struck down by the flu this, or any, season understands how quickly one can become dehydrated and sodium deprived by the runny nose and phlegm expectoration that accompanies the illness.

Add ½ tsp sea salt to 8 ounces of water and drink 3-5 times a day, until thirst stays quenched for more than 1 hour.

Most whole foods contain some sodium, even sweet fruits like bananas, apples, passionfruit, and guavas have a decent amount. So, if you eat a diet rich in whole foods, you have probably never had a sodium deficiency that was not caused by fluid loss and illness. However, because those who eschew highly processed foods are not getting excessive amounts of the mineral in their diet, fluid loss may hit the health-conscious harder.

According to the recently released Scientific Report of the 2015 Dietary Guidelines Advisory Committee, the DGAC found that the U.S. population over-consumed sodium (as well as saturated fat) relative to the “Tolerable Upper Intake Level set by the IOM [Institute of Medicine] or other maximal standard and that the overconsumption poses health risks.”2

But hyponatremia isn’t one of those health risks.

I know, it seems unfair that people who may eat a diet composed largely of empty calories are less likely to suffer from a potentially deadly ailment like hyponatremia, unless they suffer severe blood loss or diarrhea, while those who are health conscious must be more vigilant in that regard. On the other hand, by eating a high nutrient diet, maintaining physical fitness and engaging in mental hygiene, one can not only extend their life but vastly improve its quality.

A little vigilance in regards to nutrition is a small price to pay for radiant good health and overall well-being.