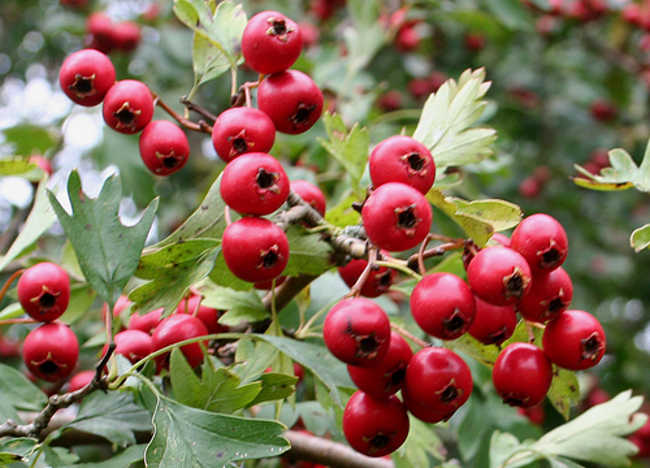 Several recent clinical research studies have demonstrated that the herb Hawthorn (Crataegus Oxyacantha) can be of great benefit to those suffering from heart failure.

“a condition in which the heart muscle cannot pump out blood effectively or efficiently. […] Left untreated, heart failure can become progressively worse because a vicious cycle develops wherein the heart gets further and further behind in its ability to pump the blood, which can lead to worsening symptoms and to acute heart failure requiring emergency medical treatment.”1

“The active components of this slow-acting cardiotonic agent are thought to be flavonoids and oligomeric procyanidins. The most studied hawthorn extracts are WS 1442 and LI 132. Reviews of placebo-controlled trials have reported both subjective and objective improvement in patients with mild forms of heart failure (New York Heart Association classes I through III). Other studies of hawthorn in patients with heart failure have revealed improvement in clinical symptoms, pressure-heart rate product, left ventricular ejection fraction, and patients’ subjective sense of well-being. However, there is no evidence of a notable reduction in mortality or sudden death.”2

In another study, ‘Hawthorn: Pharmacology and Therapeutic Uses’, published in the American Journal of Health-System Pharmacy (March 1, 2002),

“Today, hawthorn is used primarily for various cardiovascular conditions. The cardiovascular effects are believed to be the result of positive inotropic activity, ability to increase the integrity of the blood vessel wall and improve coronary blood flow, and positive effects on oxygen utilization. Flavonoids are postulated to account for these effects. Hawthorn has shown promise in the treatment of New York Heart Association (NYHA) functional class II congestive heart failure (CHF) in both uncontrolled and controlled clinical trials. There are also suggestions of a beneficial effect on blood lipids. Trials to establish an antiarrhythmic effect in humans have not been conducted.”3

Hawthorn has long been known to interact with multiple prescription drugs, mostly those used to treat hypertension, heart disorders and erectile dysfunction, but one study suggests that it is possible to safely use Hawthorn in concert with the popular heart failure drug Digoxin. Here’s a quote from ‘Interaction Study between Digoxin and a Preparation of Hawthorn (Crataegus oxyacantha)’, published in The Journal of Clinical Pharmacology, June 2003,

“The flavonoid components of hawthorn may be responsible for hawthorn’s beneficial effects in the treatment of heart failure. However, these components may also affect P-glycoprotein function and cause interactions with drugs that are P-glycoprotein substrates, such as digoxin, which is also used to treat heart failure. Therefore, the purpose of this study was to determine the effect of hawthorn on digoxin pharmacokinetic parameters. […] Following 3 weeks of concomitant therapy, hawthorn did not significantly alter the pharmacokinetic parameters for digoxin. This suggests that both hawthorn and digoxin, in the doses and dosage form studied, maybe coadministered safely.”4

Other heart conditions helped by Hawthorn

Hyperlipidemia is the scientific way of saying that one’s blood contains too many lipids (fat). High lipid levels speed up atherosclerosis (hardening of the arteries), which naturally occurs very slowly in healthy individuals as they grow old. The findings of the aforementioned ‘Hawthorn: Pharmacology and Therapeutic Use’ study suggest that Hawthorn has a beneficial effect on blood lipids.

For centuries, herbalists have recommended Hawthorn as a treatment for arrhythmia (irregular heartbeat), but there has yet to be a clinical study on patients with that specific ailment. Although, as multiple Hawthorn heart failure studies have suggested, there is some evidence that Hawthorn can strengthen and stabilize the heart against arrhythmias. In any case, most recent information of Hawthorn’s effectiveness in treating arrhythmia is likely to be anecdotal. My own experience, for example.

I’ve been using a standardized Hawthorn extract (WS 1442) for more than a decade now, to treat the tachycardia symptomatic of my congenital heart condition, and the results have been above and beyond anything I ever hoped for.

However, it’s impossible to judge how another may respond, even with the same condition and symptoms, because biochemistry differs slightly from one person to another. It’s also important to understand that it took years – more than two, closer to three – for me to become mostly asymptomatic. Another arrhythmia sufferer may require faster results to survive.

The first-century physician, botanist, and apothecary, Pedanius Dioscorides, was the first to document Hawthorn’s effect on the heart, and it’s been used for congestive heart failure since the Middle Ages when the condition was known as dropsy.

Today, there is scientific evidence that Hawthorn is indeed effective, at least in regards to heart failure. It is my hope that more research will be done on Hawthorn, to prove or disprove its ability to treat additional heart maladies. Perhaps such evidence will convince more mainstream physicians to support their patients’ use of this natural medicine, in lieu of (or in addition to) pharmaceutical drugs.