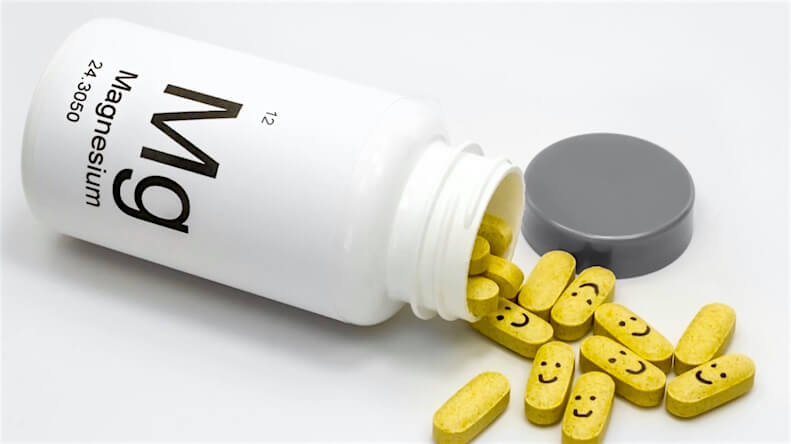 Over the years, numerous studies have hinted at a link between magnesium deficiency and the mood disorder depression. But clinical research has proven that magnesium can indeed decrease depression symptoms. The exact mechanism by which magnesium is able to accomplish this is considered more of a mystery, but previous magnesium research does offer a few clues.

Clinical researchers had already established that magnesium has an effect on the biological and transduction pathways implicated in the pathophysiology of depression. But the results of a study published in the journal Nutritional Neuroscience has demonstrated that magnesium can indeed decrease depression symptoms. It was not, however, determined if this was because those who were successfully treated with magnesium were depressed because they were magnesium deficient.

A study dating back to 2006 even suggested magnesium supplement types and dosage amounts for rapid recovery from major depression.

This study’s authors even recommended fortifying refined grains (which are almost completely stripped of their natural magnesium) and adding biologically available magnesium to municipal drinking water. Many cities in the United States do add magnesium (and other essential minerals) to the drinking water, but most do not add enough.

How Magnesium Affects the Nervous System

When we are magnesium deficient, our resting heart rate may increase, we may suffer from frequent muscle spasms and chronic pain, our sympathetic nervous system can become overactive and overworked. In addition, electrical activity in the brain is disrupted, which has been shown to negatively affect sleep. And sleep issues have been shown to be (at least partially) responsible for the mood disorders depression and anxiety in some patients.

“The link between sleep and mood has been seen over and over by researchers and doctors. For example, people with insomnia have greater levels of depression and anxiety than those who sleep normally. They are 10 times as likely to have clinical depression and 17 times as likely to have clinical anxiety. The more a person experiences insomnia and the more frequently they wake at night as a result, the higher the chances of developing depression.”3

Stress is necessary for human survival. Stress keeps us alert and ready to respond to dangerous situations. A little stress is good for us, but too much is very bad. Among other issues, stress has been shown to trigger depression.

“Sustained or chronic stress, in particular, leads to elevated hormones such as cortisol, the “stress hormone,” and reduced serotonin and other neurotransmitters in the brain, including dopamine, which has been linked to depression. When these chemical systems are working normally, they regulate biological processes like sleep, appetite, energy, and sex drive, and permit expression of normal moods and emotions. When the stress response fails to shut off and reset after a difficult situation has passed, it can lead to depression in susceptible people.”4

To make matters worse, stress, all by itself, decreases magnesium stores in the body. So, it can become a vicious cycle. Under these circumstances, the only thing we can do to prevent depression or naturally decrease depression symptoms is to consume more magnesium-rich foods and supplements, if necessary.